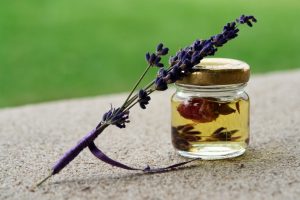 In 2015, the World Health Organization estimated that anxiety disorders affect approximately 6.3% of individuals in the United States. This is an issue of special concern for seniors because anxiety affects a disproportionate percentage of elderly people, particularly those with Alzheimer’s disease.

Anxiety disorders are treated with any of a variety of anti-anxiety drugs, benzodiazepines being a favored choice. Although these medications can be effective, they often produce unpleasant side effects. Furthermore, they can become less effective with time.

Researchers at the Kagoshima University in Japan studied the effect of linalool – a form of alcohol contained in the essential oil of lavender – as a treatment for anxiety. Lavender has often been cited by practitioners of aromatherapy as being helpful for people suffering from anxiety. The goal of the researchers was to determine if lavender, and in particular linalool, were useful in reducing anxiety, and to determine the pathway in which it functioned.

Another purpose of the research was to find safer alternatives to benzodiazepines. And, in fact, one of the team’s key findings was that linalool works without the common side effects of benzodiazepines. A paper describing the team’s results was published in the journal Frontiers in Behavioral Neuroscience.

Dr. Hideki Kashiwadani, of the Graduate School of Medical and Dental Sciences at Kagoshima University, and a co-author of the paper noted that the calming effects of linalool have been investigated and confirmed many times. However, “the sites of action of linalool were usually not addressed in these studies.”

One of the study’s important findings was that linalool works in a different way than had been thought. It had long been assumed that linalool’s effect derived from its entry into the lungs, and from there into the bloodstream. From the bloodstream, it could reach specific proteins in the brain, known as gamma aminobutyric acid type A (GABAA) receptors. These are the same receptors targeted by benzodiazepines.

The research team devised a series of experiments to test this hypothesis. They used linalool on mice that had no sense of smell — and found it had no effect. They blocked the GABAA receptors in the brain of normal mice — and again found no effect.

Their evidence was so compelling that it is now been conjectured that any calming effect of linalool when injected was likely to be due to the smell of the compound in their exhaled breath, rather than its introduction into the blood system.

This also explains why lavender, and aromatherapy in general, is so effective with Alzheimer’s patients. People with Alzheimer’s progressively lose their abilities, but their sense of smell is usually intact, making it a useful pathway for interaction — via pleasant aromas as well as the aromas of their childhood — and therapy, particularly for anxiety.

Atlantic Coast Healthcare and Rehabilitation Center, in Lakewood, NJ, provides care that is specifically designed to address the needs of individuals suffering from Alzheimer’s, dementia, or other cognitive disorders.

We use innovative sensory therapies such as audiovisual stimuli and aromatherapy, which are beneficial in inducing a sense of calm.

For the safety and well-being of cognitively impaired residents, Atlantic Coast offers a separate secure unit. The wide corridors are homelike and easy to navigate, creating an environment with a sense of familiarity and security.

The Alzheimer’s unit caregivers are specially trained to care for memory impaired residents. With their extra sensitivity and understanding of the condition and its impact, our caregivers treat each resident with dignity and love.

The cognitively impaired care program helps patients maximize their cognitive function. Likewise, the activities program is designed to foster social interaction and an appreciation of life.