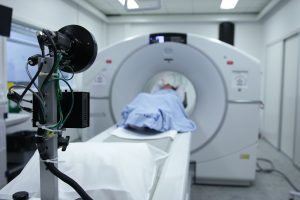 For those of us who are fascinated by the possibilities that artificial intelligence (AI) is creating, it is impossible to forget the famous 1997 tournament between the reigning world chess champion Garry Kasparov and IBM’s Deep Blue chess supercomputer. It was the first time that a machine defeated a reigning chess world champion in a one-on-one match.

Since 1997, artificial intelligence has improved immensely. In fact, today anyone can download software for their computer that is superior to Deep Blue. Even the ancient Chinese game of Go, known for its immense complexity, has yielded to the powers of artificial intelligence. In 2016 Google’s AlphaGo program beat the reigning European Go champion Fan Hui.

Games of course were only a training ground for the possibilities of artificial intelligence. Today, AI is beginning to revolutionize many areas of science and medicine. It may even beat cancer.

Cancer is the secon- leading cause of death in the United States, and lung cancer is the leading cause of death due to cancer. One of the major problems for doctors regarding the treatment of lung cancer is that it has no symptoms in its early stages. Usually, by the time symptoms are noticed, it is too late for effective therapies. Even when testing is done, CT scans have a high rate of both false positives and false negatives. Until lung cancer reaches a stage where it is already difficult to treat, radiologists have a difficult time accurately diagnosing lung cancer.

In a recent study, Daniel Tse, a member of the Google Health Research group in Mountain View California, along with a group of colleagues, used artificial intelligence techniques to detect lung cancer in CT scans. Their results appear in the journal Nature Medicine.

The group of scientists used a form of AI known as deep learning, which consisted of using data from more than 42,000 CT scans taken from the Northwestern Electronic Data Warehouse, as well as other databases, to “teach” a computer how to recognize lung cancer, even when it is at a comparatively early stage. The technique is known as deep learning since the computer uses large datasets to learn by example exactly what to look for.

After the researchers completed their AI program to recognize lung cancer, they compared its ability to accurately identify lung cancer with several board-certified US radiologists, each of whom had approximately 20 years of clinical experience. When given new CT scans, the AI program outperformed the radiologists: there was an 11% reduction in false positives and a 5% reduction in false negatives.

When previous CT scans were available, allowing doctors to compare current scans with a previous scan, the radiologists fared better, but were still unable to beat the artificial intelligence program. According to Dr. Mozziyar Etemadi, a member of the research team and an assistant professor of anesthesiology at the Northwestern University Fienberg School of Medicine in Chicago, “Radiologists generally examine hundreds of 2-D images or slices in a single CT scan but this new machine learning system views the lungs in a huge, single 3-D image. […] AI in 3-D can be much more sensitive in its ability to detect early lung cancer than the human eye looking at 2-D images.”

The program’s ability to avoid false positives is also tremendously beneficial. “Not only can we better diagnose someone with cancer,” Dr. Etemadi says, “We can also say if someone doesn’t have cancer, potentially saving them from an invasive, costly, and risky lung biopsy.”

Now that this technique has been confirmed in lung cancer, it is clear that AI could be trained to recognize virtually any type of disease that would appear in a CT scan. And it is expected that if enough data was available for deep learning, these AI programs would be more accurate than radiologists in recognizing these diseases at an early stage.

This is an astounding breakthrough — and is still at an early stage. It is to be expected that these breakthroughs will allow doctors to diagnose diseases, and in particular cancer, earlier than previously possible, and consequently to be able to save countless lives.

Atlantic Coast Healthcare and Rehabilitation Center is welcomes innovations in care, and is proud of its state-of-the-art rehab program.

Conveniently located in scenic Lakewood, NJ, close to major medical centers and just minutes from area highways, our beautiful nursing home and rehab center is situated on beautifully landscaped grounds, and provides the comfortable and pleasant living experience that is essential to ensuring optimal clinical outcomes. We have strived to create an environment and program that truly enhances quality of life, thus promoting recuperation, health, and well-being.

Our master chef and the entire staff of culinary experts prepare delicious meals to please even the most discerning palates. Our meals are not only delicious, they are also elegantly served, using fine china and utensils. In addition, we have a registered dietician to supervise the process to ensure that all meals conform to the individual dietary restrictions and requirements for every resident.

At Atlantic Coast, our goal is to offer recreational activities that stimulate both mind and body. We fashion each day’s recreation schedule with the primary purpose of encouraging social interaction and promoting physical health and fitness. To accommodate different interests and personal preferences, our Activities Director designs flexible schedules, with a variety of stimulating and engaging activity options.