Brain fog isn’t a medical condition. It’s a term used for certain symptoms that can affect your ability to think. You may feel confused or disorganized or find it hard to focus or put your thoughts into words.

It’s a type of cognitive dysfunction involving memory problems, lack of mental clarity, and poor concentration. In many cases it is treatable and reversible. 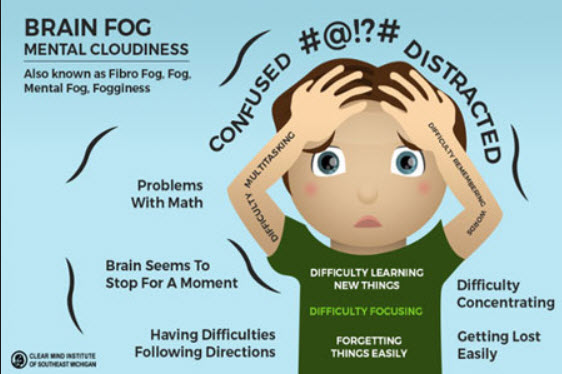 One of the first things you may think when your brain gets foggy is “Was it something I ate?”

And often you’d be right.

Here are some of the many ways the food you eat could be behind your fuzzy thinking.

Refined carbohydrates like sugar and high fructose corn syrup send your blood sugar level skyrocketing up, then crashing down.

And since your brain uses glucose as its main source of fuel, this puts your brain on a roller coaster ride — first too much, then too little glucose.

Chronically high blood glucose levels lead to insulin resistance and diabetes, both of which have been linked to Alzheimer’s.

The average American consumes 156 pounds of added sugar per year.

The low-fat diet fad has backfired, making us the fattest people who have ever walked the earth.

Your brain is largely comprised of fat, about 60% by dry weight, and low-fat diets have been as disastrous for our brains as they’ve been for our waistlines.

According to Dr. Datis Kharrazian, author of Why Isn’t My Brain Working?, when you don’t eat enough dietary fat, the brain starts to literally digest itself for the raw materials it needs to create essential brain chemicals.

Neurologist Dr. David Perlmutter, author of the bestselling book Grain Brain, found that nothing was worse for his patients’ brains than a low-fat diet.

Glucose is usually the brain’s main fuel source, but our brains are quite happy to burn fat which he calls “super fuel” for the brain.

Chronic brain inflammation can be an underlying cause of brain fog, ADHD, anxiety, depression, and memory loss, as well as serious neurological diseases such as stroke and Alzheimer’s.

And you don’t need to be concerned about dietary cholesterol being bad for your brain.

Your brain contains a lot of cholesterol and too little of it increases your risk of suicide, depression, and dementia.

You read that right.

A common side effect of chemotherapy used to treat cancer is a type of brain fog dubbed “chemo fog” or “chemo brain.”

The American Cancer Society’s official stance is that chemo brain is caused by a combination of the disease itself, treatments, sleep problems, hormonal changes, depression, and stress.

When researchers scanned patients’ brain activity before and after chemo treatments, they found chemotherapy caused observable changes in brain function indicating that chemotherapy itself plays at least some role in mental decline. (69)

Brain fog is one of the most common complaints of people with fibromyalgia and chronic fatigue syndrome (CFS).

Many say their fibro fog is more of a disability than their pain and fatigue.

People with CFS are sometimes dismissed as being hypochondriacs and told that their problems are “all in their head.”

Stanford University researchers, however, recently found distinct differences between the brains of patients with CFS and those of healthy people.

Posted in Atlantic Coast Health Tips! and tagged atlantic coast rehabilitation and healthcare directions, brain fog, chronic illness, cognitive difficulty, lack of concentration, medications, poor nutrition
← Flu Survivor: When Is It Safe To Go Back To Your Normal ScheduleZinc: What It Is, How It Works, And Why You Need It →