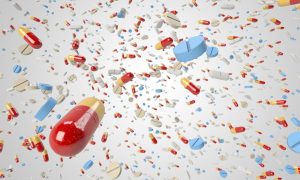 It’s hard to imagine a time without antibiotics, which first came into use during World War II. If there were no antibiotics, even minor infections, such as ear infections, could once again become deadly. And a large proportion of medical procedures and treatments, from joint replacements and bowel surgery to chemotherapy, could become too dangerous to perform.

Antibiotic-resistant bacterial strains develop because each time an individual uses an antibiotic, a small number of microbes survive, due to the fact that they have a natural resistance to the antibiotic being used. These microbes grow, spread their resistance to other microbes in the body, and to other individuals, significantly reducing the impact of antibiotics.

Each year in the United States, more than 2 million people are affected with antibiotic-resistant bacterial infections. It is estimated that they are the direct cause of at least 25,000 deaths.

Recently, researchers at Case Western Reserve University School of Medicine, in Cleveland, Ohio, developed a novel procedure for treating bacterial infections, in many cases without the use of  antibiotics at all.

Experiments on mice infected with MRSA sepsis infection were treated with specially designed small molecules that stop bacteria from producing toxins. All the mice treated with these small molecules survived the infection, while less than one-third of untreated mice did. Their research was published in the journal Scientific Reports and led by Dr. Menachem Shoham, a professor of biochemistry at Case Western.

The team also demonstrated that in difficult cases, mice treated with both antibiotics and their small molecule procedure had far fewer levels of blood-borne bacteria than mice treated only with antibiotics. Dr. Shoham and his team suggested that for relatively healthy patients, such as athletes suffering from a MSRA infection, these small molecules may be enough to clear an infection, but for those with a weakened immune system, a combination of treatments may be required.

The team’s last area of research covered preliminary tests that showed that their small molecules were similarly effective for various other strains of bacteria, from strep throat to catheter infections. The authors concluded that their new procedure may provide a partial solution to the looming and frightening global threat of antibiotic resistance.

Atlantic Coast Healthcare and Rehabilitation Center, in Lakewood, NJ, takes a restorative approach to senior health, maximizing function and mobility in a positive and upbeat atmosphere.