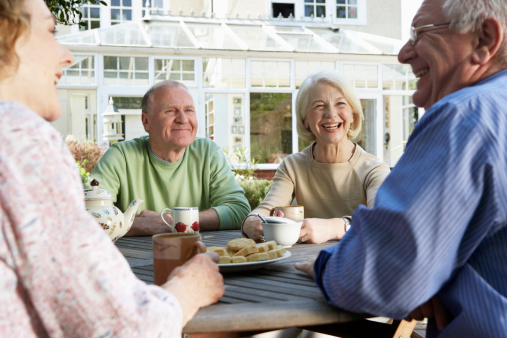 Psychologist Susan Pinker may have found the secret to living longer.

It’s not a low-fat or gluten-free diet, and it’s not the power of a positive attitude. It’s our personal relationships.

In a TED Talk, as well as in her book, The Village Effect: How Face-to-Face Contact Can Make Us Healthier, Happier, and Smarter, Pinker notes that in the developed world, women live 6 to 8 years longer than men. However, she found one place where men
live as long as women: Sardinia, an Italian island in the Mediterranean.

Not only did Sardinia have ten times as many villagers over the age of 100 than found
in North America, Sardinian men lived just as long as women.

Pinker visited Sardinia to find out its secret. What she found was that the villagers —
both men and women — had unusually strong “social integration,” meaning that they interacted with a large number of people over the course of the day. In fact, she found that the degree of social integration a person had was one of the strongest predictors of the length of their lives.

This is one of the reasons she believes women in other places live longer than men. Women are more likely to “prioritize and groom their face-to-face relationships over
their lifespans.” They are more social, and that literally keeps them alive.

But you don’t have to live in the Mediterranean to experience the “village effect.” Even on this side of the world, people who gather regularly with friends live an average of fifteen years longer than those who consider themselves loners.

People often have a stereotype of a nursing home as a place where people sit quietly
by themselves. People have obviously never been to Atlantic Coast Healthcare and Rehabilitation Center, in Lakewood, NJ.

At Atlantic Coast, our Activities Director creates a full and varied schedule of activities every day. The purpose of these engaging activities is not only to promote physical and mental health and fitness, but to encourage social interaction. The activities, the beautifully landscaped grounds, and the world-class accommodations all combine to provide Atlantic Coast residents their own “village effect” right here in New Jersey.