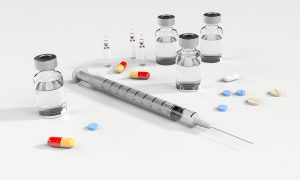 People with type 1 diabetes face the unpleasant task of injecting themselves with insulin daily, usually more than once a day. This requirement is means that not all diabetics will follow medical instructions, given most people’s aversion to injections.

Recently Dr. Robert Langer of the Koch Institute for Integrative Cancer Research at the Massachusetts Institute of Technology, along with a group of colleagues, developed a new technique for insulin delivery. Their research was published in the journal Science.

Dr. Langer and his colleagues conceived of a novel idea for a pill delivery system. The pill contains an insulin “microneedle” that injects itself directly into the stomach wall after being swallowed. Since the stomach lining contains no pain receptors, the process is painless, and therefore far more tolerable for people who currently require insulin injections.

The microneedle developed by the team of researchers was made up of two parts: a tip containing compressed insulin to penetrate the stomach wall, and a biodegradable shaft to hold the tip in place. Inside of the pill the researchers created a disk and a compressed spring. The disc and spring were made out of sugar and attached to the microneedle. When the disk of sugar dissolves, it releases the spring, causing the microneedle to inject insulin into the stomach wall.

But how can the pill ensure that the microneedle would inject itself into the stomach wall — and not somewhere else? How could a pill automatically orient itself to find the correct position?

The solution to this complicated problem was found from studying the leopard tortoise, a type of tortoise which is an expert at self-righting. Using computer modeling based on their studies of the leopard tortoise, the researchers were able to design a capsule that could right itself regardless of how the capsule landed in the stomach. Using this technique, the research team was able to ensure that the needle would always make contact with the stomach wall.

The research team has already shown that they can deliver doses of 5 mg with their new system. They have also shown that the pill can pass through the digestive system without any negative effects.

Dr. Langer and his colleagues are hopeful that their new pill will end the need for injection, not only of insulin, but for a variety of drugs that can currently only be delivered by injection.