Multiple myeloma is a blood cancer which forms when white blood cells that fight germs start to grow uncontrollably. These abnormal myeloma cells then combine into a single cancerous tumor. They congregate in marrow as well as the spongy tissue inside some of your bigger bones. If you have more than one of these tumors, it’s called multiple myeloma. 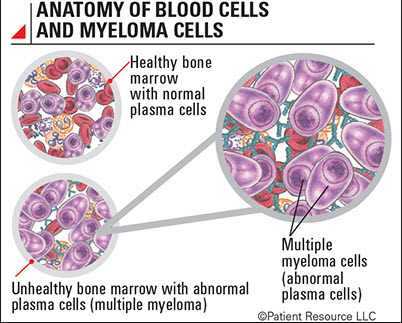 Like many cancers, multiple myeloma has no known cause. However, there are some things that can raise your chances. Age plays a role: Most people who have it are over 65. It’s twice as common in African-Americans and slightly more likely to affect men than women. Genetics plays a role as well. If someone in your family has it, you’re also more likely to get it.

Plasma cells aren’t the only ones formed in your bone marrow. Other white blood cells, red blood cells, and platelets are created there, too. However, myeloma cells will prevent bone marrow from making these healthy blood cells. This leads to:

Myeloma cells are a major enemy to bones. Believe it or not, your “old” bone is constantly being dissolved by cells called osteoclasts. Meanwhile, cells known as osteoblasts are making new bone. These things normally happen together. Myeloma cells speed up the breakdown process, but not the buildup. The result: Your bones get weak and will fracture easily.

Plasma cells make antibodies, which fight germs. If you get a cold, they can create an antibody to attack the virus that’s making you sick. Abnormal plasma cells don’t do that. Myeloma cells multiply and quickly crowd out your healthy plasma cells, along with other white blood cells that protect you from infection.

Because your bone dissolves faster than normal, you may have a high level of calcium in your blood. You might also feel really thirsty and dehydrated.

Blood tests can check for many red flags, like low blood cell counts and high calcium levels. X-rays can reveal bone loss. But the most important test for this cancer is a bone marrow biopsy. A doctor will insert a special needle into your bone and remove a tiny piece of tissue. He’ll look at it with a microscope to see if you have myeloma cells.

There are traditional cancer drugs like chemotherapy and corticosteroids. And there several additional and new options:

Increasing the number of drugs in a combination can improve their effectiveness. This does increase the chance of side effects, however. Side effects may include nausea, fatigue, rashes, or more serious conditions, such as shortness of breath and seizures.

If you’re healthy, your doctor may suggest a stem cell transplant. Before it, you’ll get a high dose of chemo or radiation to kill cells in your bone marrow. Then you’ll get a transplant of healthy stem cells — the ones that create new blood. You might get your own cells. The doctor will call this an autologous transplant. Or they could come from a donor. This is known as an allogeneic transplant.

Drugs and blood transfusions improve anemia (low red blood cell counts) and the extreme fatigue it causes. There’s a special procedure that thins your thickened blood, a problem that can result in dizziness and confusion. Another treatment, intravenous immunoglobulin (IVIG), will help your body fight infections. In addition, drugs such bisphosphonates lower the risk of bone fractures.

Thalidomide was first used in the late 1950s as a sedative and to combat nausea during pregnancy. It was banned for decades after it was found to cause birth defects. In the late 1990s, however, cancer researchers discovered that thalidomide is an effective treatment for multiple myeloma. It helps people who are newly diagnosed and helps keep the myeloma from returning in people whose disease has been brought under control. Thalidomide is also given to people with multiple myeloma if the disease comes back.

Lenalidomide is a more potent form of thalidomide. It has fewer side effects but can cause tingling or numbness, fatigue, rashes, and more serious conditions, such as shortness of breath or seizures. Lenalidomide is the most common immune-modifying drug. It is included in most initial treatments and also for maintenance.

Pomalidomide (Pomalyst®) is the most recent immune-modifying drug approved for people with multiple myeloma. It can be effective when lenalidomide and other drugs stop working.

Finally, researchers believe that thalidomide, lenalidomide, and pomalidomide help the body’s immune system kill the cancer cells and stop them from growing and living in bone marrow.

Watch this informative video put out by The Mayo Clinic on multiple myeloma: