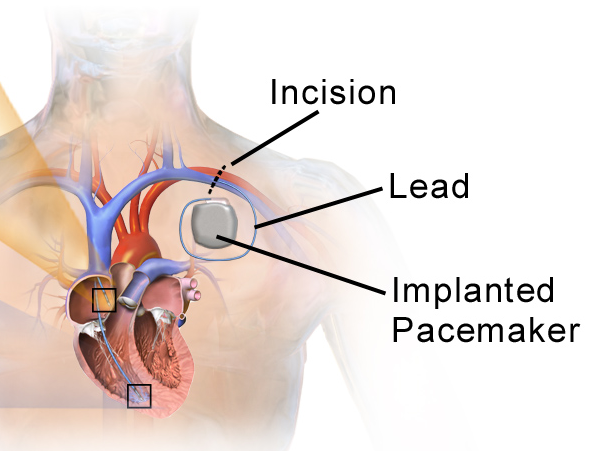 The heart of a healthy adult at rest beats between 60 and 100 times a minute. Each beat is initiated by a group of cells in the upper right chamber of the heart that acts as a sort of “spark plug,” generating an electrical signal that travels through the heart. If the heart’s natural “pacemaker” is not working properly, the heart rhythm will be abnormal, a condition known as arrhythmia. In some cases, arrhythmia needs to be addressed by inserting an electronic pacemaker to do the job. Wondering about pacemakers? Here are the FAQs:

What Conditions Necessitate a Pacemaker?

Pacemakers are most commonly used to treat bradycardia, an abnormally slow heartbeat. But other disorders, such as heart block, heart failure, and Long QT Syndrome, may also be brought under control with the use of a pacemaker.

Do I need Open-Heart Surgery to Get a Pacemaker?

No. Pacemakers are inserted through a small incision, usually under local anesthesia. Generally, the surgery takes about two hours, and patients are released from the hospital within a couple of days.

How Long Will It Take Me to Recover after Getting a Pacemaker?

Do I Have to Limit My Activities If I Have a Pacemaker?

After you have been cleared by your doctor following pacemaker insertion surgery, you do not need to limit your activities. However, anything that has a strong electromagnetic field may interfere with the functioning of your pacemaker.

For example, people with pacemakers should not have MRIs.

In order to help you avoid risk, your doctor will give you a pacemaker ID card, which you should carry with you at all times. You should also consider wearing a MedicAlert bracelet that states that you have a pacemaker.

Cell phones are safe, but should be kept a minimum of 6 to 12 inches away from the pacemaker.

Metal detectors, such as those found at airports and stores, are generally safe, though you should minimize your exposure by moving quickly through them and not standing near them. Hand-held metal detectors, however, pose greater risk. If you are ever selected for special screening with a hand-held device, show your pacemaker ID card and ask to be checked in a different way.

Other devices, including medical devices, may also interfere with pacemakers. Be sure to inform your doctor that you have a pacemaker before undergoing any procedure.

How Long Will My Pacemaker Last?

The part of the pacemaker that typically wears out is the battery. Most pacemaker batteries last between 5 and 15 years. The procedure to replace the battery is usually quick and requires little recovery time.