Shingles is a viral infection that is caused by the varicella-zoster virus, better known as the chickenpox virus. It occurs when someone who has either had chickenpox or the chickenpox vaccine becomes reinfected with the virus. Shingles first presents as pain, followed by a red rash after a few days. However, shingles is no mere nuisance; it poses serious risks in the elderly.

According to the Centers for Disease Control (CDC), while one third of Americans will develop shingles over the course of their lifetime, adults over sixty are at the greatest risk for developing shingles. Adults over 80 have a 50% likelihood of having shingles. Besides age, other risk factors for shingles include: having diseases that weaken the immune system; undergoing radiation or chemotherapy; or taking immuno-suppressing medication, such as steroids and anti-rejection medication for transplanted organs.

In addition to being at increased risk of developing shingles, seniors are also more likely to have serious complications from the disease. Continued pain, lasting long after the rash has cleared up, is the most common complication of shingles. This condition, known as postherpetic neuralgia (PHN), can be debilitating, and can last for years. Both the risk and the severity of PHN increases with age. Complications in the elderly also include bacterial infections, hearing loss, facial paralysis, blindness, and rarely, encephalitis.

In addition, studies have shown significant increases in the risk of strokes and heart attacks in the week following an occurrence of shingles. 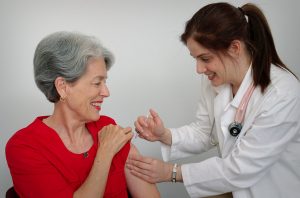 While anti-viral medication can reduce the severity of shingles, the best medicine is prevention. Speak to your doctor about vaccination.

Medicare Part D, and many private health insurance plans cover the shingles vaccine, though there may be some cost to the patient, depending on the plan. But don’t let cost deter you: GlaxoSmithKline, the manufacturer of Shingrix, provides vaccines to adults who are unable to afford the vaccine, depending on eligibility.

Shingles can — and should — be avoided, especially in the elderly.