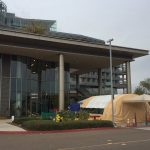 Remember last year’s flu season? It was bad, the worst in decades. It even made the news when California emergency rooms were so overwhelmed with flu patients that they were forced to set up “surge tents” in their parking lots in order to handle the onslaught.

It wasn’t just optics; the numbers broke records. Nearly 1 million people were hospitalized for flu-related complications, the highest rate in modern history. 79,000 people died from the flu, the highest toll in forty years. And that number included a record 180 pediatric deaths.

The Centers for Disease Control and Prevention (CDC) in Atlanta, remembers last year’s flu season, too. Their recent report reveals another noteworthy feature of that deadly season: a nearly 7% decrease in the number of people who were vaccinated, resulting in the lowest vaccination rate since 2010.

Although it cannot be proven that the low vaccination rate of 37% caused the severity of last year’s flu season, it is certain that raising the vaccination rate will lower the impact of the flu.

Yet, many people resist getting a flu shot.

Why? It could be a lot of things.

Perhaps people think that if they get a flu vaccine, they are protected forever. They’re not; people need a new flu vaccine every year since the shot only protects against the current year’s flu strain.

Perhaps people have heard that the current vaccine is not that effective against the current strain. Even in years when that was true, such as the 2012–2013 flu season, the “ineffective” vaccine prevented an estimated 10,000 deaths.

The fact is that no matter how “effective” or “ineffective” the flu vaccine is, it’s far more effective than not getting vaccinated at all. So do yourself a favor, and don’t end up a statistic. Get vaccinated.

At Atlantic Coast Healthcare and Rehabilitation Center, in Lakewood, NJ, our goal is to maximize our residents’ function and mobility in a positive and upbeat atmosphere. And that includes keeping them safe from infectious diseases, such as the flu.