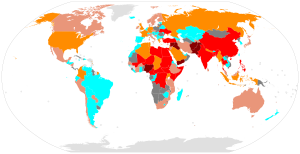 Parkinson’s Disease is a progressive neurodegenerative condition that affects the central nervous system. As the disease advances, movement of any kind becomes difficult. In its later stages, Parkinson’s often causes dementia.

Recently a group of researchers published an article in the Journal of Parkinson’s Disease which provides evidence that Parkinson’s is becoming a pandemic. Although the term pandemic is normally associated with diseases that spread from person to person, the authors of this study noted that Parkinson’s shares many aspects of a pandemic. For example, Parkinson’s Disease has become a global disease, present in every population and in every location across the globe. Also, pandemics tend to move in a predictable path, and Parkinson’s disease has clearly been spreading from the West to the East.

The researchers noted that many scientists object to the term pandemic being used for conditions such as Parkinson’s disease or diabetes since they are not transmitted through contact with another individual. However, they feel that it is important to widen the definition of pandemic to include conditions that are spread via other means.

The authors argue that many risk factors for illness are being transmitted across the world, causing a rapid increase in a variety of severe health conditions. Highly processed foods and various pesticides certainly fall into this category. But even lifestyle changes, for example the rapid rise in the use of computers and other electronic devices that is creating a more sedentary lifestyle worldwide, has its effects on entire populations.

According to this adjustment in definition, Parkinson’s Disease has indeed become a pandemic. Across the world the leading cause of disability is neurological disorders. And among neurological disorders Parkinson’s disease is the fastest growing. In fact, between 1990 and 2015 the number of people worldwide with Parkinson’s Disease doubled; the disease now affects more than 6 million people. And according to statistical models, experts predict that by 2040 this number will increase to 12 million people.

Some scientists have pointed out that Parkinson’s Disease generally affects older people, suggesting that the increased incidence of the disease is due to the lengthening average lifespan across the world. However, the growth of Parkinson’s has increased far beyond what would be expected by the relatively minor increase in lifespan that we have witnessed. Instead, the researchers suggest that there are specific risk factors that exist today that are increasing the risk of Parkinson’s Disease. Among these risk factors are:

These three categories have all been linked to Parkinson’s disease, and they are found in ever increasing amounts in the products we consume or use every day.

For example, paraquat is a pesticide that has been directly associated with Parkinson’s. For this reason, it has already been banned in 32 countries. Nevertheless, in the United States, paraquat is being used in ever increasing quantities.

The authors of this new study hope that by educating the public about the dangers of Parkinson’s, we can help to stop its rapid growth. In the author’s words: “We have the means to prevent potentially millions from ever experiencing the debilitating effects of Parkinson’s Disease.”

Along with the activism the authors hope to generate, which could, for example, force the ban of paraquat in the United States and many other countries, the need for better medications to help battle this tragic disease is also needed. Fortunately, many new medications are currently being developed.

At Atlantic Coast, our goal is to offer activities that stimulate both mind and body. We fashion each day’s recreation schedule with the primary purpose of encouraging social interaction and promoting physical health and fitness. To accommodate different interests and personal preferences, our Activities Director designs flexible schedules, with a variety of stimulating and engaging activity options.