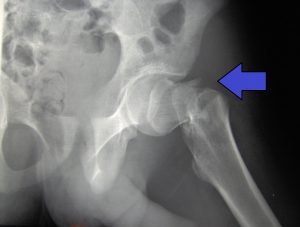 Diagnosis and treatment of osteoporosis is going down. Great news, right? Unfortunately, not.

A study published in the journal Osteoporosis International reports that between 2002 and 2015, hip fractures steadily declined in women 65 and older. But the decline started to level off in 2012, and osteoporosis specialists are concerned that hip fractures are rising once again.

Part of the problem is that Medicare reduced reimbursement rates for bone density scans, so they became more expensive.

But a more serious issue is that doctors are not diagnosing and treating osteoporosis — even when the patient’s osteoporosis has already caused them to fracture their hip. According to Dr. E. Michael Lewiecki, lead author of the study, a staggering 80% of patients with an osteoporotic hip fracture are never treated for osteoporosis.

Dr. Sundeep Khosla, a bone specialist at the Mayo Clinic, compared the situation to having a patient with a heart attack not be treated for high blood pressure or elevated cholesterol.

How big a problem is this? Huge. Every year, more than 300,000 seniors (three-quarters of them female) are hospitalized with a fractured hip. Between 20 and 30% of them will die within the year. Half of those who survive will not be able to walk on their own again. And a quarter of the survivors will need long-term care.

But doctors are not solely to blame for the lack of treatment. Even when osteoporosis medication is prescribed, very often patients will not take it. In the early 2000’s, the osteoporosis drug bisphosphonate was linked to fractures in the jaw and femur. Although these complications are rare, patients were concerned that the drugs they were being prescribed to preserve their bone density might actually make their osteoporosis worse. Between 2008 and 2012, Dr. Khosla found bisphosphonate use declined by 50%. Patient compliance with a doctor’s prescription of the osteoporosis medication, he says, went from “an already dismal 15% in 2004 to an abysmal 3% in the last quarter of 2013.”

What to do? It may well be that bisphosphonates were overprescribed when they first were released; at that time they were used not only used for osteoporosis, but also for osteopenia, a very early stage of bone loss. Today doctors have more sophisticated methods of determining which patients would benefit from pharmacological treatment, and how long that treatment should last.

The best advice? Make sure you take enough calcium and vitamin D; take action to prevent falls, including participating in weight-bearing exercise and balance training; and, importantly, if your doctor recommends you take a bone-preserving medication because you are at special risk, do it.